‘Twas the night before Christmas 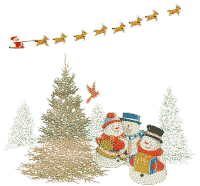 ‘Twas the night before Christmas
When all through the house
Not a creature was stirring,
Not even my spouse.

The dining room table with clutter was spread
With pedigree charts and with letters which said…
«Too bad about the data for which you wrote;
Sank in a storm on an ill-fated boat.»

Stacks of old copies of wills and such
Were proof that my work had become too much.
Our children were nestled all snug in their beds,
While visions of sugarplums danced in their heads.

And I at my table was ready to drop
From work on my album with photos to crop.
Christmas was here, and such was my lot
That presents and goodies and toys I’d forgot.

Had I not been busy with grandparents’ wills,
I’d not have forgotten to shop for such thrills,
While others bought gifts to bring Christmas cheers,
I’d spent time researching those birth dates and years.

While I was thus musing about my sad plight,
A strange noise on the lawn gave me such a great fright.
Away to the window I flew in a flash,
Tore open the drapes and yanked up the sash.

When what with my wondering eyes should appear,
But an overstuffed sleigh and eight small reindeer.
Up to the house top the reindeer they flew,
With a sleigh full of toys and ‘ole Santa Claus, too.

And then in a twinkle, I heard on the roof
The prancing and pawing of thirty-two hoofs.
As I drew in my head, and bumped it on the sash,
Down the cold chimney fell Santa–KER-RASH!

«Dear» Santa had come from the roof in a wreck,
And tracked soot on the carpet, (I could wring his short neck!)
Spotting my face, good ‘ole Santa could see
I had no Christmas spirit you’d have to agree.

He spoke not a word, but went straight to his work
And filled all the stockings, (I felt like a jerk).
Here was Santa, who’d brought us such gladness and joy:
When I’d been too busy for even one toy.

He spied my research on the table all spread
«A genealogist!» He cried! (My face was all red!)
«Tonight I’ve met many like you,» Santa grinned,
As he pulled from his sack a large book he had penned.

I gazed with amusement–the cover it read
Genealogy Lines for Which You Have Plead.
«I know what it’s like as a genealogy bug.»
He said as he gave me a great Santa hug.

«While the elves make the sleighful of toys I now carry,
I do some research in the North Pole Library!
A special treat I am thus able to bring,
To genealogy folk who can’t find a thing.»

«Now off you go to your bed for a rest,
I’ll clean up the house from this genealogy mess.»
As I climbed up the stairs full of gladness and glee,
I looked back at Santa who’d brought much to me.

While settling in bed, I heard Santa’s clear whistle,
To his team, which then rose like the down of a thistle.
And I heard him exclaim as he flew out of sight,
«Family history is Fun! Merry Christmas! Goodnight!